Hi! This is the third week that Lo and I are writing on this website. It is so much fun and I’m glad that we got the chance.

This week we have had a few issues with Bella. For a part of the autumn she has been a bit unlike herself. She has been tired and unmotivated periodically. One day when I came to take care of her, she was bleeding from her nose. At first I was not sure if it was nose-bleed from illness or if she had just hurt herself and was bleeding from a scar.

But it turned out that Bella was bleeding through her nose from inside. At first I was very scared, it´s never fun when your horse is bleeding anywhere. We quickly called the nearest veterinary. The Vet came to examine Bella trying to find out what was wrong. A horse with ordinary flu does usually have fever but Bella didn’t. The same day my Mum found some mould in Bella´s hay. Some of the hay-bales smelled like old mushrooms. However, most of the hay-bales that where mouldy where at the back of the stack. The vet took some blood, for tests, from Bella, with hopes of finding out what could be wrong. The tests showed that Bella had had an allergic reaction to mould in the hay. Even if all of the bales was not mouldy, the spores had spread throughout them all. Bella rested for 2 weeks and later quickly became fully recovered! 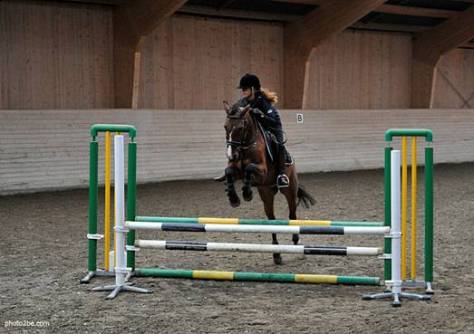 However, in the beginning of this week Bella was coughing and had a higher temperature than normal. Some of our hay bales were affected again. Bella  developed an allergy against mould. Now we are trying another kind of hay for her to eat, silage. It has higher water content than hay and it’s generally easier for hay to get mouldy than for silage . I hope that she will not have to rest for a full two weeks like the first time she reacted.

It is Christmas break from school right now for me. It’s great to have and I will spend my vacation with Bella. We are going to have so much fun. Lo and I will be back next week. Otherwise we update daily on boella.horseworld.se

If you too have hay quality issue I highly recommend having a look at HayGain hay steamers: http://www.haygain.co.uk/the-problem.php

Do not feed mouldy hay to horses