A few years ago I noticed an advert in Horse and Hound for the Dublin Horse Show. That sounds like fun, I thought, and cajoled a friend into joining me for a hop across the Irish Sea.

Dublin was indeed fun. It was Royal Ascot meets Father Ted, a society event packed with elegantly dressed ladies, farmers from counties I’d never heard of, and a never ending procession of grey ponies. It was an enormous, heaving party and we loved it. In no time at all we were leaning against the white rails every morning consulting our 352-page catalogues as if we knew what we were doing – because this is a serious, knowledgeable crowd of people. When you take your seat for the Irish Draughts stallion parade you can be sure you will find yourself sitting next to somebody who has just put their mare to the winner.

We decided it was time for another visit and arrived to find that everything was reassuringly familiar. The Dublin Horse Show takes place under the auspices of the Royal Dublin Society whose aim is to promote economic and cultural development in Ireland. The unassuming stone building that houses the society is on a main road in the suburb of Ballsbridge and as you approach you would never guess what lies behind it: 1500 horses, a large jumping arena, a smaller jumping arena, two large show rings, several smaller collecting rings and a shopping village. It is possibly the only horse show in the world where you can walk through an art gallery and take in an exhibition in the library before settling down for a spot of show jumping.

Wednesday is a fairly quiet day by Dublin standards. There are plenty of folk about but everybody – exhibitors, horses, spectators – is settling themselves in. We have a season ticket, which means we have the same seats in the grandstand for the next five days. The ticket cost 108 euros and is an absolute bargain. We watch the Speed Stakes, where I am rather perplexed by the fact that some of the horses are going so slowly they end up with time faults. Don’t they know the clue is in the name? Not so the Irish riders. It’s foot to the floor and they take the first five places in the class.

Next, we go for a stroll. This is not a simple matter. Although the showground is compact in relation to the number of horses, there is so much going on it is difficult to know where to start. I spot my favourite thing – a Connemara pony – and we hop into a couple of seats by Ring 2. This turns out to be the performance hunter class.

A Connemara pony takies a stroll before his class

The ponies are dazzling and when they fan out after the line-up they look like a slightly smaller, slightly more ragged version of the Spanish Riding School, though this effect is slightly spoilt by a yellow dun suddenly popping out behind all the greys. Where did he come from? 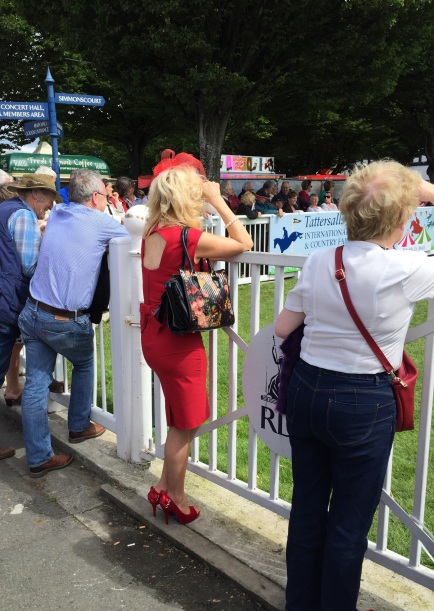 Ladies Day. The winning lady was wearing black and white, but I rather liked this red look.

Thursday is a very big day. Not for the horses, but for the ladies. Unlike other events, which have to install funfairs and dancing diggers in order to tempt the public through their gates, Dublin has come up with something much simpler and more attractive: a class for the two-legged fillies. If you think you are in show condition you can win a package worth 10,000 euros. That’s right. Ten. Thousand. Euros. I was almost tempted into my Kurt Geigers myself.

When we are not goggling at some of the Ladies’ get-ups, we remember to look at the horses. Today we have more grey ponies, lightweight hunters, the Irish Draught Stallion parade and hunter mares and foals.

There are 11 lightweight hunters, until one of them broncs down the long side and deposits his rider in a heap. The remaining ten are scrutinised by two judges and a rapt crowd. The woman behind me is tutoring her daughter: ‘Now, you see that chestnut? That’s the one that’s going to win the class.’ I turn round to find a tiny girl of four studying what did indeed turn out to be the winner, a seven-year-old gelding called Woodfield Alight.

One of the judges in this class is a lovely, quiet rider and a couple of the horses go better for her than they do their own riders. I enjoy watching her expression – it is evident that some of the horses are nicer to ride than she expected, some not what she was expecting.

There is a real sense at Dublin that the horses being shown have been bred with a job in mind; it is not about showing for showing’s sake.

Watching the Draughts trot up. Those trees really come into their own when it is pouring with rain!

Nowhere is this more evident than in the Draught stallion parade. The commentator gives us a rundown of the lineage and the offspring – this one has a son jumping in Holland, that one has a daughter competing at elementary dressage in the UK. The Draughts are the backbone of the Irish sport horse industry and it is quite something to see so many of them together.

Another of the lovely Draughts. Notice the hardy souls toughing it out in the pouring rain.

Some are smaller than I was expecting and they come in a variety of colours, though I cannot pretend there aren’t a lot of greys. They are all quite beautiful and full of character. They don’t think twice about hopping onto two legs and staying there. The handlers, as professional as they come, don’t take much notice of what’s going on on the end of the lead rope and have clearly had plenty of practice at dodging waving hooves!

Next: the Aga Khan Cup, MiddleWeight Hunters and Retraining of Racehorses

All photographs are copyright Moira Duncan