This Summer Camp 2017 was the first one of upgraded versions of intensive training camps I have been organising in the last few years. We incorporated a training show into it with Life Savings as its Patron (more on the Show later), added sponsored awards and much more focus on the rider’s technique than ever before. I loved it and the riders seemed to as well. We already have bigger plans for next year but for now, let me reflect on this year’s experiences in stages…

If you haven’t read DAY 1 reflections and would like to stay on track, here it is: RIDER FOCUS DAY 1

Day two was all about jumping skills. The morning sessions were based on tempo control for most riders with the demands adjusted to the individual riding skills.

Myself with Hayley in the background

Hover over the photos for rider’s and horse’s names.

It has always been drummed into me that to jump well one needs a very good feel for tempo as well as be able to maintain the exact speed for several minutes at the time. Whilst this might seem like an easy task, many situations challenge that exactness. Turns, corners, circles, all have their bearing on horse’s balance, power/impulsion, energy level and straightness.

Exercise 1 asked the riders to be able to set a canter at the speed of 325 mpm and maintain it for 1 minute. We set a minute marker and roughly measured the 325 meters. After several goes, everyone nailed this exercise but the differences between tempo control on one rein and the other were quite significant for most combinations which I hope gave everyone a food for thought. 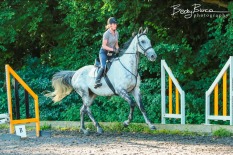 Hover over the photos for rider’s and horse’s names.

On photo above, I am passing some branches with leaves to Gemma. Ozzy is a very laid back character and generating energy is not always his priority. I think finding what motivates each horse to move is the key. Kicking and generally escalating leg aids is my personal pet hate in riding solutions so I prefer to look outside of the box. Gemma went with the idea (another reason of many why she did get the Coach’s Award) and a little bit of forest around the shoulders did give Ozzy enough flair to allow the rider to improve his posture and way of going further.

Once we had the tempo on the flat under control, I added two cavaletti/small jumps, one on each side of the arena half way the long side of it. It’s interesting how even  a tiny jump can affect all canter skills…My idea was to stay put until everyone got it as well as I thought they were capable of unless it meant over-working the horse. It worked and I was very pleased with everyone’s efforts. 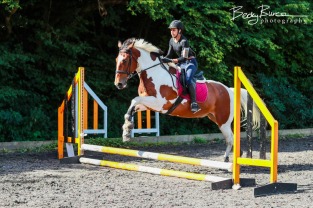 I believe the good feel for the right kind of canter is a huge part of jumping skill and developing that in the riders is one of my top priorities whatever their level.

Throughout these exercises I added individual corrections to suit the goals each rider set for themselves before the Camp for the duration of the weekend. It was possibly one of the most influential training session of the Camp as I wanted to see if the riders were able to apply Friday’s lessons into their riding as well as staying focused on new demands.

The afternoon consisted of training sessions over a course & Training Show Round. This kind of show has been on my mind for a while and the Summer Camp 2017 provided a perfect testing grounds. I asked all riders to wear competition gear to get them in the right frame of mind 😉

I wanted to create a kind of show that would award partnership, style and performance in that order and I was assessing the riders in that exact order too. I do believe riding is a team sport of sorts – the team spirit between horse & rider should shine through every step on the course. I don’t mean here the vigorous whipping or other means of “hard” riding in order to get over a jump or any other methods that have fear or abuse at their roots. I don’t find it “class”, “brave”, “admirable” etc nor did I want to foster an environment in which the horse was some kind of an enemy to conquer over the course of jumps.

The style referred to rider’s seat and way of riding – again all adjusted to the individual skills level and I didn’t expect those riders who only started to jump to show any particular perfection ;). However, riding in balance with a horse is what personally drives me in my own improvement and I always strive to pass that mission on to everyone I teach.

Performance referred to results but not in terms of poles down but in terms of meeting personal goals for the horses and riders.

All rules of the show were set with this in mind.

The show round – consisted of 2 phases: 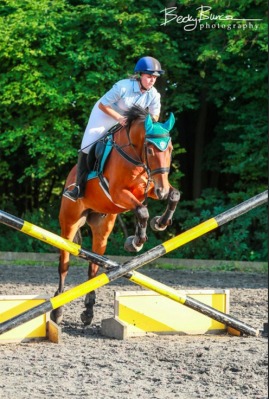 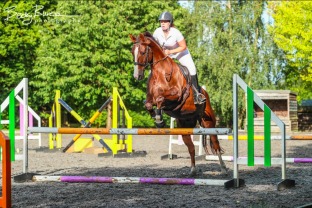