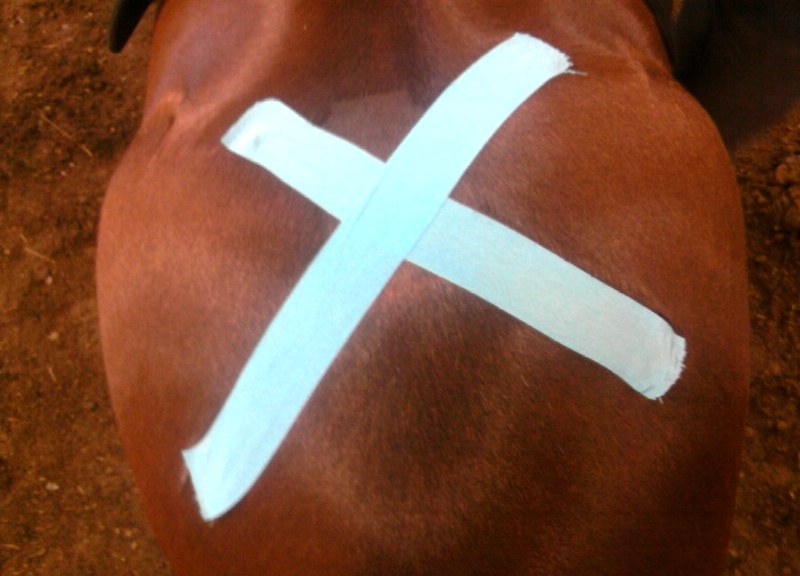 From September 2009 to 18th April 2012 I had a great pleasure to be around a very special horse. One of the many medical and rehabilitative subjects (!) he acquainted me with was the use of kinesio taping when working with proprioceptively challenged horse.

You have probably noticed kinesio taping in one form or another since it’s been somewhat of a hype in human athletics in recent years. I would like to share with you my experience with it when it was used on Kingsley in January & February 2010.

Diagnosis as of November 2009: Sacroiliac strain & high level of pain in the poll area

This is what I wrote in his rehabilitation diary on 16th Nov 2009: “The soreness of the area is not a secret (he almost goes down as you prod around the pelvis). He also displays following clinical signs: unlevel pelvis (ever so slightly but still – apparently can be normal but not if pain is present), intermittent hind leg lameness, the stance with one hind leg always propped forwards, avoiding square stance, strong reaction to palpation, unbalanced movement, rushing in all gaits or refusing to move properly forwards, dropping into four beat canter, back soreness, and the list goes on.”

Treatment: “the Vet suggested cortisone injections which are basically steroids injected into sacroiliac area in between tendons, soft tissue and joint. Their role is to kill the inflammation and pain and help the healing process. It seems that even if he was taken to the clinic for bone scan to fully confirm the severity of the problem, the first thing that is being done now in cases like his is to inject anyway.

Injections are basically both the treatment and diagnostic tool in one. If the horse improves, it definitely has sacroiliac strain/disease/problem whatever you want to call it. If it doesn’t then the bone scan is the only way to take diagnosis further.
So we went with injections.
However, they are steroids…and some horses might develop laminitis due to injections. That and various allergic reactions too.”

After box rest and slow process of bringing Kingsley to the point when I was able to work him for 17 minutes in walk under saddle, he began movement therapy which involved the tapes. At that time, he had about 80% less of reaction to palpation in SI (sacroiliac) region, stopped moving very wide in front and started transferring weight more evenly through both hindlegs.
When I first saw the physiotherapist applying the tapes I admit to thinking no way this would work.
This is what I wrote in his diary on 18th January 2010: “The moment I got on and started walking I could tell something was different. He was even in my both reins and actually taking the contact which he avoided so far. At first I thought it was because he was getting stronger in general and as he had been ridden in rounder frame for the last 7 sessions and he was getting the idea.
However, the moment we took the tape off he immediately felt more wobbly and less coordinated, light (behind the bit) in the hand and harder to keep straight.
The difference was so pronounced I am converted to using it.
The idea behind it is that it stimulates the neuro perception and it makes the horse more aware of his muscles. In effect he is using them properly which in turn helps him move straighter.”
Below is an old footage (I wasn’t using You Tube regularly yet! ) of low quality but good enough to show some steps. I was taking short clips of him regularly because with rehabilitating complex cases you can’t always count on your memory or feel.
VIDEO 1

VIDEO 2 below shows his tendency to very wiggly, crooked steps upon losing balance. He always felt like a water bed to ride, never quite solid underneath you as if some structure just didn’t support his spine well. I could liken it to walking across a rope bridge with some ropes cut off – it was there, it was “working” but you could never predict how the next step would feel like.

Amazingly, that change I noticed with those tapes was as if someone connected some cut ropes back together giving a much more regular, stronger, less wobbly feel of his back.

I can honestly say I found the tapes surprisingly beneficial but had one (huge) problem with them -as we extended our working time they just would not stay on.

All articles I was able to find online at the time where about human use on hairless skin 😉 I guess one solution could have been to clip him with very close contact clippers and I can’t remember why we didn’t. I do remember, however, that the tape was expensive and it didn’t take long to go through a roll. There was no way to re-use the strips as they would not stick the second time. Although at first the results were really encouraging, the effects plateaued after about a month.

The tapes I see used on horses now seem to stay on very well, I don’t know whether the material is slightly different or whether it’s an altogether different product to the one we had at the time.

If I had an access to the tape that actually stays on during movement for longer than 15 minutes I would definitely be trying it as part of rehabilitation programme.

Have you ever tried it yourself or on your horse?