It’s Friday, which means the Aga Khan Trophy. This is the biggie. The world’s best showjumpers – and I have seen Scott Brash with my own eyes, so I know he is here – pitch up in teams of four for an afternoon of thrills and spills. Volunteers are handing out flags and it would seem that the whole of Ireland is here; there surely can’t be anybody left in County Mayo. There is only one way to get through the crowds: keep your line and kick on.

Ireland’s president arrives amid much fanfare and then everybody settles down for the first entertainment of the afternoo  n: the parade. This is almost worth the ticket price alone. About a hundred pipers march into the arena, blowing for all they are worth, to lead each team round the ring. Frankly, anybody who is prepared to get on a sparky warmblood and attempt to follow this lot at ten paces deserves as much of the 200,000 euros up for grabs as they can get. Whenever the band strikes up – which is often – the goggling equines plant, plunge, run backwards and wave to the crowd. What’s wrong with them – haven’t they seen men in orange skirts before? You can almost hear the riders grinding their teeth, although one cheery Spaniard manages to keep his reins in one hand and take pictures of us taking pictures of him as he passes the grandstand.

Ireland gets off to a flying start and just keeps on flying. At the end of the first round the home team – Greg Broderick, Darragh Kenny, Bertram Allen and Cian O’Connor – are well on the way to winning back the trophy they last lifted three years ago, in front of a crowd that should really be wearing a martingale. The commentator, who sounds disturbingly like Bono from U2, gives up all pretence of impartiality and begins wishing the Irish riders the best of luck. Is there a rule against this? I don’t know. Who cares. The spectators are approaching hysteria. The British team, who went clear in the first round, begin knocking poles and Charlie Jayne of the US ends up face down in the water jump, his horse having sensibly stayed on dry land. The grandstand can barely contain its glee at this turn of events. Ireland has given a masterclass in how to ride a Nations Cup and has ended up so far ahead of the other teams that the final rider doesn’t even need to get his horse out. That’s what you call a good day at the office.

Saturday brings one of the most popular events at the show, the Racehorse to Riding Horse class.

The ex racehorses line up – sort of – after their first trot round.

In a country not overrun with sporting heroes, Ireland’s thoroughbreds are its pride and joy and the class always includes one or two four-legged celebrities, who tend to do rather well. Top jockey Barry Geraghty is to be the ride judge and nobody seems at all bothered by the fact that he is on first name terms with several of the horses he is assessing. Lady Jane Cecil, widow of the late Sir Henry, is judging the conformation.

There is an actual scrum for seats. People are climbing over each other, sitting on laps or attempting to squeeze four buttocks into a small square of plastic that really is meant for just the two. At Dublin you can win a share of 1000 euros if you correctly guess the first three horses in the line-up (this is the same for all the showing classes), which brings out a certain competitiveness in the crowd.

The woman next to me has increased her chances by forming a small syndicate with a friend who is evidently on the other side of the ring. They discuss the ex-racers at length as they canter past – some a little faster than others – and it takes the ladies a while to decide who is going on the score sheet, except in the case of one gelding with a rather hgh head carriage. ‘Not that chestnut,’ my neighbour barks into her phone. ‘It’s a donkey.’ 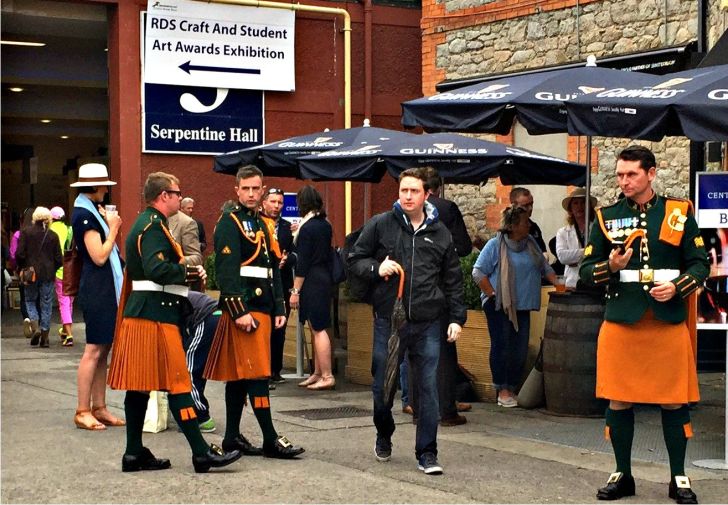 Mr Geraghty, unrecognisable in tweed and a bowler hat, hops from horse to horse, but doesn’t bother altering his stirrups when he climbs aboard. I guess if you can ride with your knees round your ears, you can ride with them dagling anywhere.

Forpadydeplasterer (just say it out loud) is declared the winner for the second year running and adds a Royal Dublin Society red rosette to the Arkle Trophy he won at Cheltenham in 2009, while Gold Cup winner Imperial Commander is pulled in second, to the disgust of my neighbour. Better luck next year, eh? 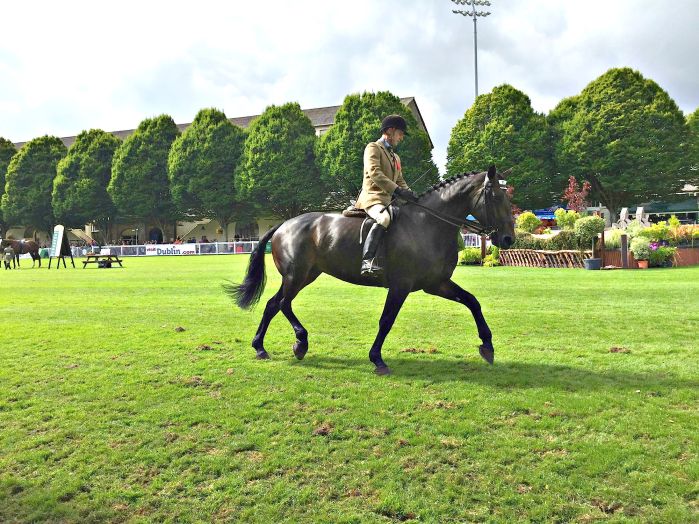 There is so much at this show that I simply didn’t see and unfortunately can’t tell you much about. I missed the thoroughbred stallion parade, though I did catch them backstage as I scurried past on my way to the shopping village, and I made a conscious decision to give the Irish Pony Club games a miss on account of my nerves still being a little frazzled from the mayhem of 2010.

I glimpsed some coloured cobs while I was waiting to buy a Guinness in the grandstand and was aware of young event horse classes taking place somewhere over yonder. I made it all the way to the Simmonscourt arena (miles away on the other side of a road) for Rob Hoekstra’s showjumping masterclass, but had to dash out after ten minutes to get back to Ring 1 for the Draughts. I managed quite a bit of the middleweight hunters and the working hunter ponies but made the schoolgirl error of giving up my place at the rail in order to fetch a coffee. After an absence of 15 minutes there was just no way back. Ah, well. Time to go and try on some more breeches.

All photographs are copyright Moira Duncan