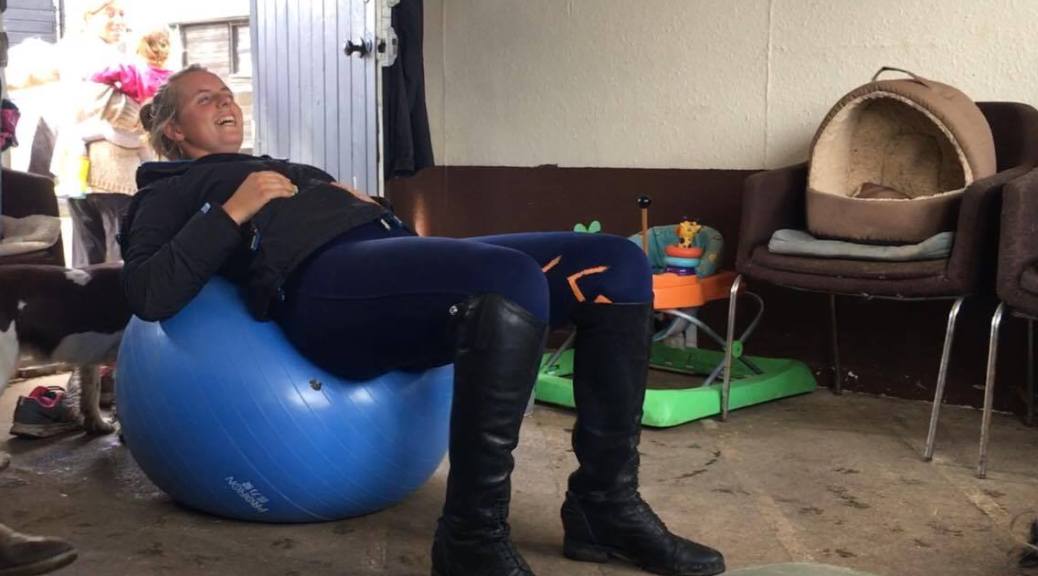 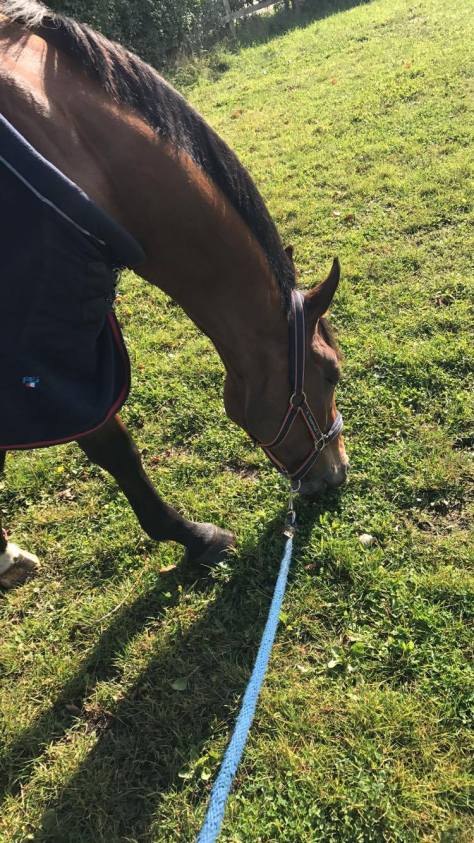 I arrived slightly earlier before my lesson to take ozzy for a grass walk just so he could stretch his legs after having a busy day the day before. After 20 minutes of grass it was then time to get ready so again I made use of the heat lamps just to warm his back up before our flat lesson.
Ozzy felt great when I got on and was walking around, he felt like he was stretching in his walk and felt looser, sometimes Ozzy tends to start with a disconnected walk so he gives the feeling that he is not quite connected and his stride gets short. 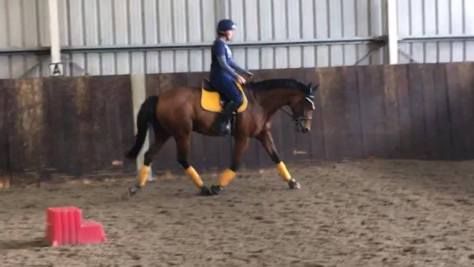 Again me and Wiola discussed what we the lesson aim was and for this lesson we was going to do a pole exercise to help with balance and canter rhythm. We had 4 poles out, one at each quarter of a circle, 2 of the poles were slightly raised. We did the exercise in trot to start with and then we did it once in canter each way. My first attempt in canter on both ways highlighted the areas in where both me and Ozzy struggle. 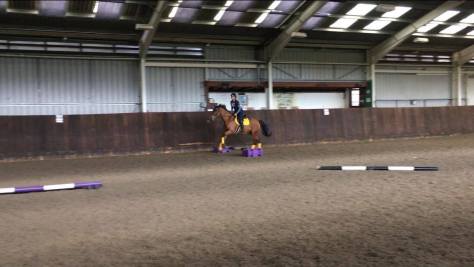 As a rider I found it difficult at the start as I was aiming for him to get over each raised pole and was trying to push him for a stride rather than just waiting and letting him find his own feet and balance, towards the end I got better at this and Ozzy became more established.
Because Ozzy found it harder on the right rein towards the end I put him in canter but on the outside of the circle so without going over the poles, he then settled into a canter where I could feel he was really trying and he had that bit more of a push from behind. He became a little on the forehand but I was able to support him a little more when he did this and was able to help him balance before returning back to trot. 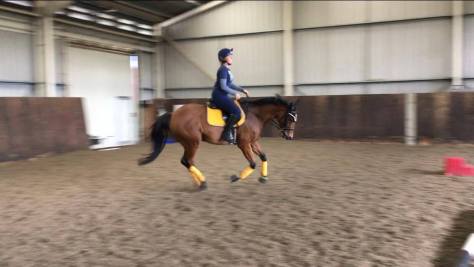 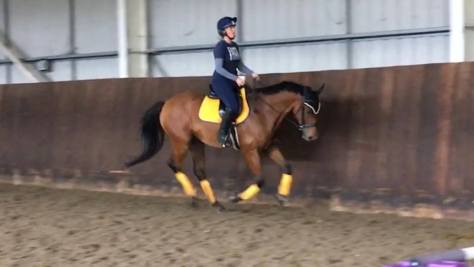 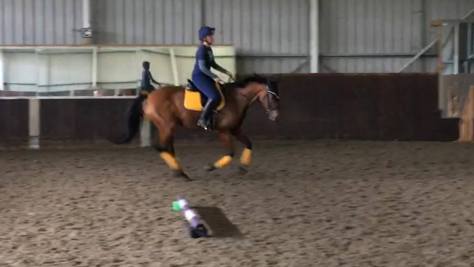 I was super pleased with Ozzy at the end of this lesson as I have been working on his canter and felt that we had established it even if it was just for a brief moment it just showed that he is becoming stronger and with more patience it will all fall into place.
After working so hard, thanks to the staff at Brackenhill Stud they kindly agreed to allow Ozzy to go in one of the paddocks so he could have stretch and a roll for a few hours. Meanwhile while Ozzy got to have his wind down time, it was time to do some ball exercises to mimic my errors and how to correct them. One of the exercises was to correct my turning position so making sure my sternum stays inline with the withers, figuring out how to turn the body without turning before the horse. 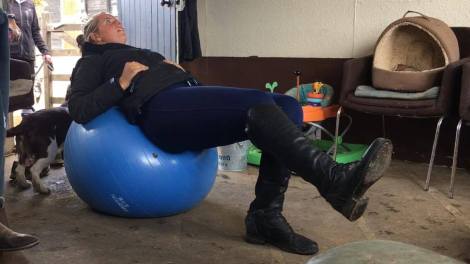 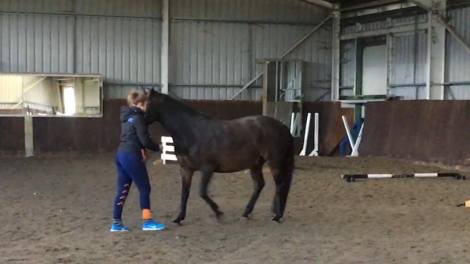 Groundwork with Leo. We use a combination of classical in-hand work exercises and methods developed by Equitation Science International (www.esi-education.com)

After a few hours in the field, I got Ozzy in, gave him a groom and got ready for our next lesson. Our last lesson we had a joint lesson with Kelly and Mojo and for this lesson we planned to do some grid work. While Kelly was warming up and going through some exercises I gave Ozzy a long walk and a brief warm up as by this time he was tiring.
Gridwork is really hard for Ozzy as he is slightly on the forehand so when landing he has to recover quickly enough to make the next jump, it became even more of a challenge for him as we had some bounces included so here Ozzy had to be quicker with his legs and not to jump too flat. The first few times I felt like we were nose diving through them but it was about letting him figure out his feet and how he could make it more comfortable for himself. By the end he felt bit better as he didn’t feel like he was on the forehand as much and he was being quicker with his legs and more powerful. 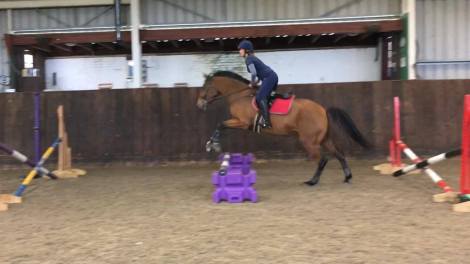 Gemma’s training stay award was co-sponsored by Brackenhill Stud, a Henley base for the Academy’s training. Big thank you to Emma Brinkworth and everyone at the Stud for making Gemma and Ozzy feel so welcome 🙂

We have limited availability for Full/Part/Competition Livery at Brackenhill Stud in Henley-on-Thames, a well-established and beautiful yard with fantastic facilities.

If you simply want to enjoy your horse and our superb hacking, or if you are a serious competitor we will cater for all of your equestrian needs in a friendly, relaxed atmosphere with dedicated and knowledgeable staff. 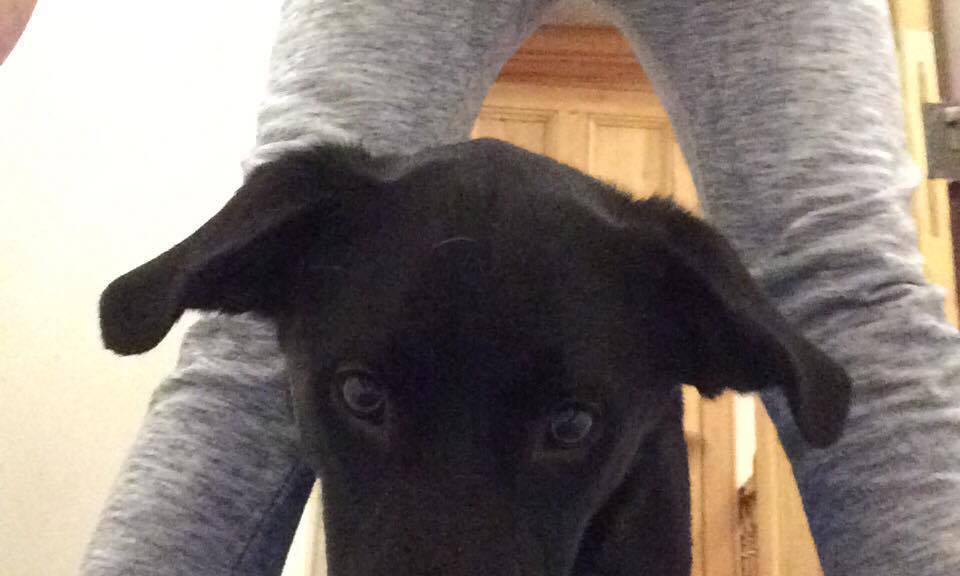 In January this year I allocated one day every 30-40 days for a feedback & theory learning/catch up/fun day for the Academy riders and on each of these days we decided to set some challenges among those who attend. 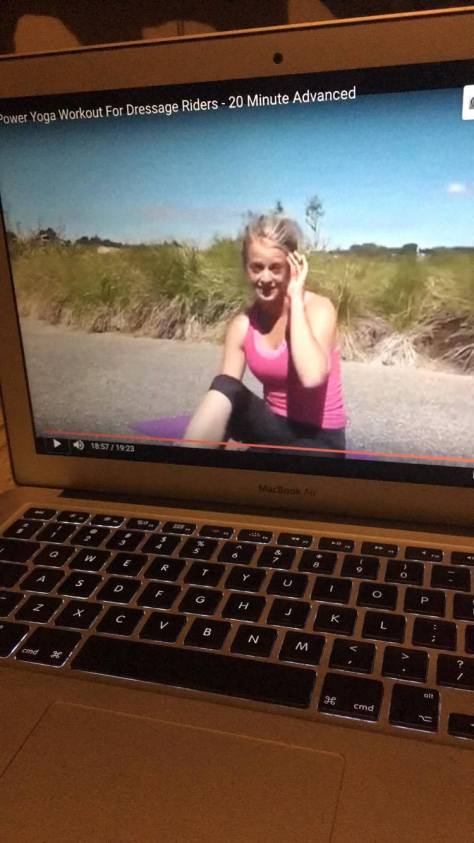 Last month, our in-house rider challenge was Flexibility & Suppleness and yoga seemed like a good choice (at the time!!!). The main aim of this challenge is not so much to go from no supplementary riding regime to a full on one but to test different systems, to figure out what might work for what kind of rider, their personality and lifestyle. Another reason for it is to direct some focus into how athletic ability develops which hopefully links with more understanding of how horses might experience “training”.

Despite many differences, horses and people have many athletic similarities, their muscles tire, their lactic acid build up, their hearts need conditioning to effort, ligaments and tendons can over strain, mentally they might cope better or worse with work load etc

Doing any form of exercise with some basic attention to ones health is not a bad insight into training principles.

I have personally tried a course of yoga several years ago and found it immensely challenging. Flexibility is not my forte and stretching is the necessary evil! I should probably do it every day but in the same way as some people just can’t let go of fast foods, my muscles just like their tight state!

Not surprisingly, the beginning was tough for us. We shared some photos of our faces after doing first set of yoga on the first day of the challenge and lets just say, these photos will never see outside our closed conversation 😉

We went for an easy option of finding video workouts on You Tube and went with Power Yoga For Dressage Riders channel for many of the sessions.

Exercises are well explained and videos watch easily, the weather on the screen made me drool a bit though 😉 I started with the the beginner workout video, here’s a link if you’d like to try it: Yoga For Dressage Riders – Flexibility And Flow

March is our Core & Cardio challenge so stay tuned for update in April but in the meantime, if you know of any good online programmes for us to try, give us a shout in the comments 😀 Self promotion welcome! 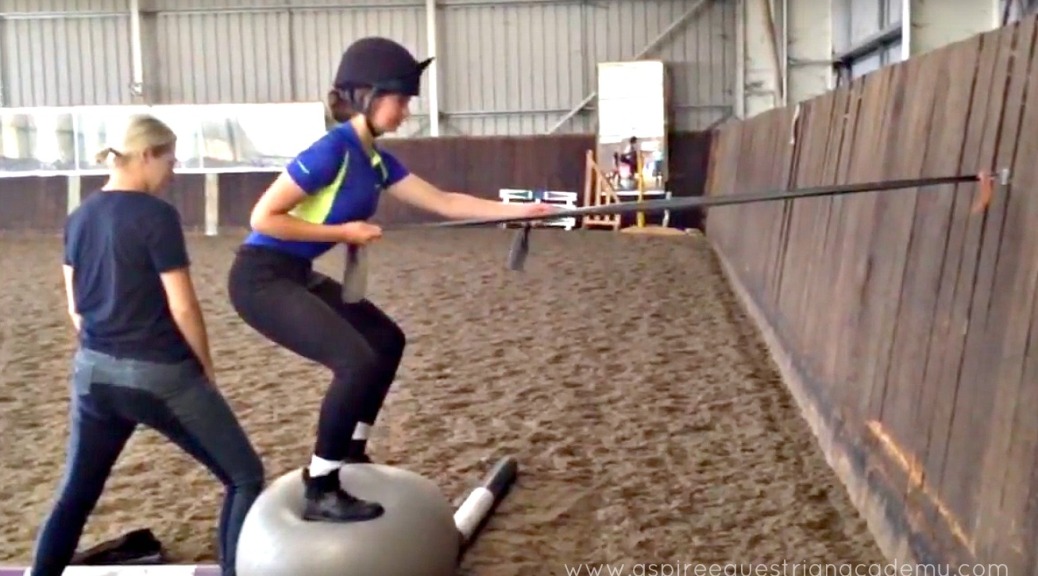 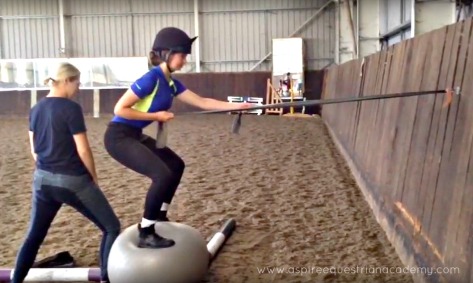 The first time you try to stand on the gym ball you might conclude it a mission impossible. Your joints might go all stiff, muscles all rigid and you might try to grasp for anything and anyone to grab hold of for balance.

If this sounds a bit like you when your horse is playful and fresh or when he takes off awkwardly over  a jump or when you feel nervous in the saddle for whatever reason, you might want to try this exercise at home.

The ability to relax during an intense effort is something that is possible to learn. That “active relaxation” allows for a positive tension to keep muscles in a state of readiness without the negative tension creeping in and making you rigid and and stilted in your movements.

For the above exercise you’ll need:

Benefits (if you persevere with this exercise) :